Tributes paid to PV Narasimha Rao on his birth anniversary

Addressing on the occasion, T Srinivas Yadav demanded that late PV Narasimha Rao should be awarded Bharat Ratna. He had introduced economic reforms in the country and his services and political acumen, had won laurels across the world, besides putting the country on the development path. Unfortunately, he did not get the recognition, he deserved, said the Minister.

Transport Minister Puvvada Ajay Kumar garlanded the statue of Narasimha Rao at Lakaram Circle, Mamata road in the city. Speaking on the occasion he said it was sad that Centre ignored the former Prime Minister who boosted India’s image in the world.

The minister demanded the Centre to confer Bharat Ratna on Narasimha Rao saying that he had introduced economic reforms paving the way for the nation’s development when the country was in dire straits.

Even as the Centre failed to respect Narasimha Rao the Telangana government has honoured him by holding his year-long birth centenary celebrations. Narasimha Rao was the greatest man who would remain forever in the hearts of Telugu people, Ajay Kumar noted. 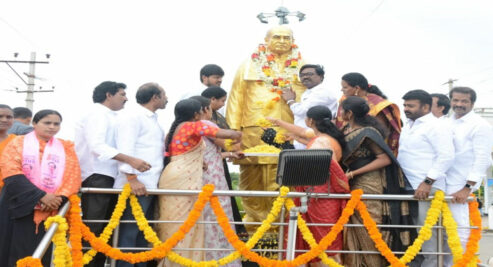 The minister lauded Narasimha Rao as the architect of modern India. With the reforms introduced by him as the Prime Minister, the country has achieved qualitative development not only economically but also in areas such as nuclear energy, foreign policy and internal security.

The spirit with which Narasimha Rao significantly increased the wealth of the country by following innovative policies was embedded in the activities of the Telangana government, the minister said.

Desiring the welfare of all the people, the development activities implemented by the State government were ideal for the country. Telangana would move forward with the inspiration provided by Narasimha Rao as great son of the soil, Ajay Kumar said.

The minister later released a book, ‘Labdhidarula madilo emuntundi’ penned by Induru Krishnama Chary at his camp office at VDO’s Colony in the city. People in the State were happy with the Chief Minister K Chandrashekhar Rao, who had taken up the welfare of the poor as his responsibility by introducing several schemes, he said.

The author of the book explained that the book presents an account of the emergence of Telangana and a sense of gratitude towards the TRS regime in the minds of the beneficiaries benefitted through many schemes implemented by the government.