The local governor says troops have received the order to leave the city after weeks of fighting against Russian troops.

Defending Ukrainian troops will have to withdraw from the embattled city of Severodonetsk, the governor of Ukraine’s Luhansk region has said, after weeks of fierce fighting against Russian forces in the strategic city.

“Ukrainian armed forces will have to retreat from Severodonetsk. They have received an order to do so,” Serhiy Haidai said on Friday on Telegram.

“Remaining in positions that have been relentlessly shelled for months just doesn’t make sense,” he added.

Haidai did not indicate whether troops would be withdrawn immediately from the city in Luhansk, or over what timeframe the withdrawal would happen.

After failing to take the capital, Kyiv, early in the war, Russian forces have focused on trying to take complete control of Luhansk and Donetsk provinces, which together comprise the Donbas region in eastern Ukraine. Parts of the Donbas were already held by Russian-backed separatists before Vladimir Putin, the president of Russia, ordered his troops to attack neighbouring Ukraine on February 24. 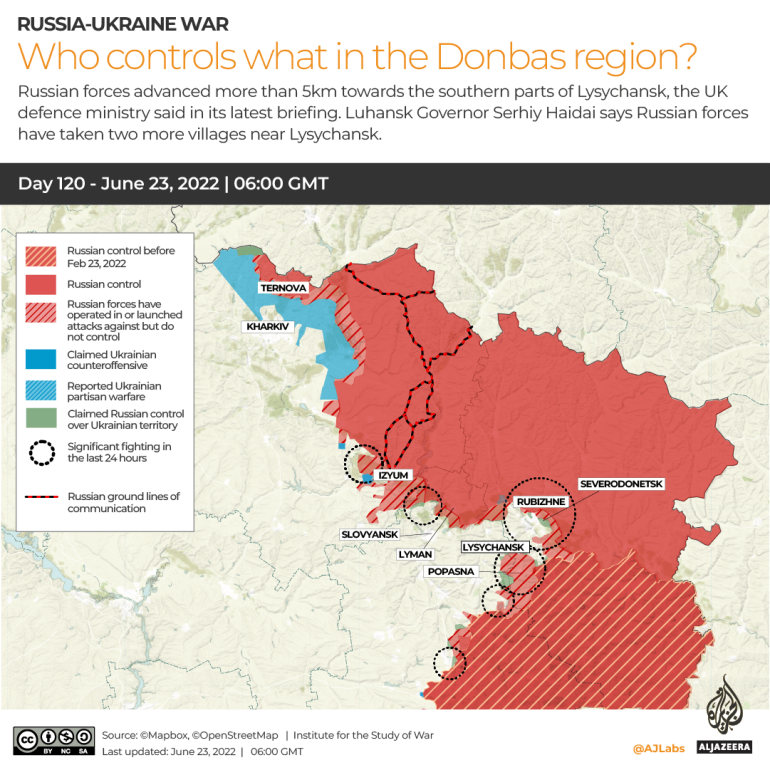 Some of the heaviest fightings of the entire Russian invasion of Ukraine have taken place in Severodonetsk, where street-by-street battles have been going on for a month, with Russia slowly and painstakingly taking more ground.

Ukrainian forces had already been pushed back from much of the city, leaving them in control of only industrial areas.

Haidai said Severodonetsk has been “nearly turned to rubble” by continual bombardment.

“All critical infrastructure has been destroyed. Ninety percent of the city is damaged, 80 percent [of] houses will have to be demolished,” he said.

The battle for the city is key for Russia to establish control over the last remaining Ukrainian-held sliver of the Luhansk region, with only its twin city of Lysychansk left in Ukrainian hands if Severodonetsk were to fall.

Haidai said the Russians were now advancing on Lysychansk, which has been facing increasingly heavy Russian bombardment.

The AFP news agency reported its journalists driving out of the city on Thursday twice had to jump out of cars and lie on the ground as Russian forces shelled the city’s main supply road. They saw dark smoke rising over the road ahead, and heard artillery fire and saw flashes of light, while the road was strewn with trees felled by shelling.

The situation for those that remain in the city was increasingly bleak.

Liliya Nesterenko said her house had no gas, water or electricity and she and her mother were cooking on a campfire. She was cycling along the street, and had come out to feed a friend’s pets.

But the 39-year-old was upbeat about the city’s defences: “I believe in our Ukrainian army, they should [be able to] cope.

A representative of pro-Russian separatists in Ukraine earlier told AFP the resistance of Ukrainian forces trying to defend Lysychansk and Severodonetsk was “pointless and futile”.

“At the rate our soldiers are going, very soon the whole territory of the Luhansk People’s Republic will be liberated,” said Andrei Marochko, a spokesman for the Moscow-backed army of Luhansk.

Donbas, Ukraine’s industrial heartland, is a region which Russia and its separatist allies in eastern Ukraine aim to fully capture as one of their war aims.

“In many respects, the fate of the Donbas is being decided there,” Ukrainian President Volodymyr Zelenskyy said of Severodonetsk recently.